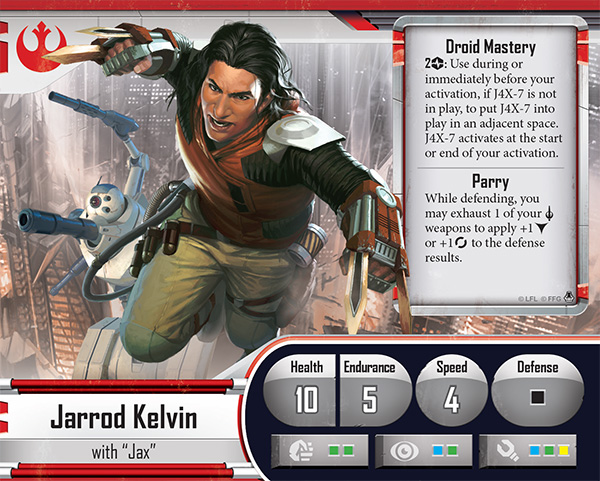 Jarrod Kelvin is a droid builder who can use his supporting character to great effect. The droid in question is J4X-7, known as Jax, and roles a blue combat dice, once you have Jarrod’s reward and Mechanical Mastery Jax, is an invaluable tool.

Jarrod needs another Melee weapon, it doesn’t really matter which you take but at tier 1 the Vibroblade is a good choice however, in the Heart of the Empire expansion there is a Polearm at tier 2 that rolls two red dice. If you have Hoth as well there is a tier 3 mod card called Vibrogenerator.

It’s not cheap at 350 credits but if Jarrod is in your group and has the Polearm buying this mod is essential. It adds 2 surge and 2 damage to the Polearms two Red dice and gives you pierce one and cleave 2.

Jarrod, when tooled up a little is a damage-dealing leviathan and so the 1000 credits he will need for this gear is a wise investment for your party.

Jarrod knows how to deal damage but add to this his health pool of 10, an endurance of 5 and speed of 4 Jarrod is an assault tank.

Using the right build is important and so I have two options that I think are very effective and will change up the way he plays a little if, like me, you like to experiment but still win!

For only 9 XP the first build will solve reach issues Balanced Approach, Forward Momentum, Mutual Progression, Leaping Slash. The move attack, attack of Leaping slash is fantastic for only 1 strain and because of Balanced Approach you will also gain one health and probably have a damage token in tow when you do attack.

The other option is to go for a Jax focused build in which case you could take Forward Momentum, Scout’s Loadout, Mutual Progression, Mechanical Master but I think the first build is probably better for overall damage and costs 1 XP less.

I don’t see much of a use case for Slicers Upgrades simply because of the number of times during a mission it would be useful however your opinion may differ based on how you play Jarrod.

Back to hub center