Senjutsu: Battle for Japan has me breaking my silence on a Kickstarter project. I don’t like to comment on something that is yet to release but I have read the rule book, spoken with the project developers and marvelled at the artwork.

Given the very nature of Kickstarter, it would be unwise for me to comment before I have a product in hand so all I will say is, I really like the look of this one. Stay tuned to this site for a review when the game releases in July 2022. 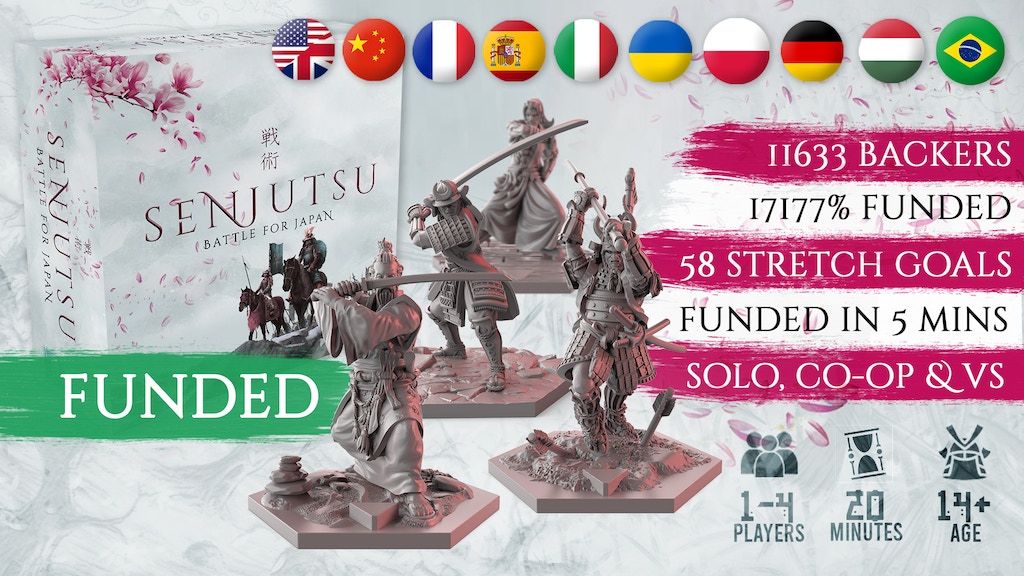 Senjutsu is a Samurai Skirmish Game for 1-4 Players, set in the Warring States Period of Feudal Japan. Playing as a unique Samurai, you will battle opponents in tense, thematic duels that will decide the fate of your clan.

The Path Of The Ronin Solo Narrative Campaign is a beautiful Campaign Book- meets Graphic Novel told from the perspective of a Samurai living in the period. As they wander through the tumultuous land, they’ll be tested and have to fight to survive.  The outcomes of your efforts will shape the narrative as it unfolds and change your Samurai’s abilities as you play.

Come back each day to see a new Social Stretch Goals and be part of our amazing community to unlock more features within Senjutsu, Battle For Japan.

Each double pack Add-on comes with two 32mm miniatures and 108 cards including each character’s Signature Cards, Kamae Trees, new base Ability Cards and their own unique Solo decks.

Add-ons are optional purchases in addition to your current pledge.

Purchase Add-ons by first selecting either the Deluxe or Core pledge level, then before confirming your payment, select the available Add-ons from the drop-down menu. Kickstarter will increase the cost of your total pledge amount to reflect these additions.

Pre-set or custom decks? The choice is yours.

If you want to skip Deck Construction, there will be a series of pre-constructed Ability Card decks for your chosen Samurai which let you jump into Senjutsu’s tense, nail-biting competitive combat system straight away!

Ability Cards are varied and can be graded by Jade, Gold, Steel and Wood.

The Kamae tree and Kame Ring system provide your Samurai with a tactical way to gain bonuses from the Ability Cards. Being in a specific Kamae when the cards are revealed will enhance Ability Card effects or enhance the way you play the card.

The Kamae system folds neatly into the tactics of your Ability Deck, allowing for powerful combinations and fun, thematic decks to be played.

Game-play is straightforward and fast. Simply choose an Ability Card from your hand and play it face down. Simultaneously reveal this Ability Card alongside the opponent’s, with the highest Initiative Value acting first.

Attack cards, if executed successfully, will deal a number of Wound Cards to your opponent.  Reaching the Samurai’s Wound Limit will result in their defeat.

The artwork on this campaign page is not final and will continue to be improved as the project develops.

As each Ability Card represents the abstracted thoughts and actions of your Samurai, we will be commissioning further art pieces to create an elegant, flowing panel system on each Ability Card that thematically grounds the game in feudal Japanese culture.

The Winds Of Change Narrative Campaign is a follow-up to the Path Of The Ronin. Featuring equally beautiful art and an immersive storyline, guide a young Samurai through the changing landscape of feudal Japan as the European powers begin to influence the destiny of the Japanese people.

The outcomes of your efforts will shape the narrative as it unfolds and change your Samurai’s abilities as you play.

The agile Student, trained by the Master, is a young and ferocious Samurai, desperate to forge his own path in the changing vistas of Japan. His Signature Ability Cards focus on flexibility, a smooth ramping up of aggression and strong, straight-forward attacks.

The vengeful Warrior or Onna-Musha (Female Samurai) travels the land searching for the Ronin responsible for killing her family in cold blood. She wields an O-Dachi, a two-metre long blade, echoing the legendary female Samurai Tomoe Gozen.

Her Signature Ability Cards focus on extreme aggression and savage killing blows. She is vulnerable to attrition-based attacks and exhaustion but hits hard enough to put fear into many of her opponents.

The Master or Sensei uses the ways of old to focus his mind and strike precisely with his heirloom blade. He is a patient and measured fighter, able to use his unique Ability Cards to defend himself in almost any situation whilst still retaining the ability to attack.

On the battlefield, his expert training means that any surrounding Hex may be vulnerable to unusual and highly situational strikes!

The Ronin or Masterless Samurai is a heavily armoured monster, built for war.

He is without honour, striking without mercy with his Naginata, a bladed spear.

The Ronin’s Ability Cards utilize both range and aggression to keep all opponent’s on the back foot. With his heavy armour, turn aside the enemy blows and keep up the pressure to wear them down until they can be slain.

The Ninja or Concealed Warrior is quick and deadly. Armed with the Kusarigama, a chained flail and sickle, he moves with the environment as his ally.

His unique Ability Cards feature tracks, secret weapons and smoke bombs. Use these unusual cards to escape from tight spots on the battlefield and fight on. However, beware of long combats! The Ninja suffers when exposed to the light of day.

Play before buying or download the rules here. Both the TTS demo and the Rulebook are prototypes and will be improved throughout (and after) the campaign. The final Rulebook will feature detailed contents, a tab sorting system and a definitive index to make reading through the rules as easy as possible.  Click here to play on Tabletop Simulator

Type to search or hit ESC to close
See all results