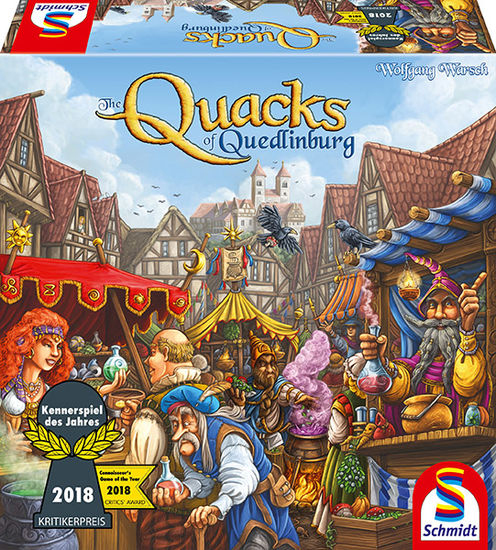 Quacks of Quedlinburg, 7 bombs is too many stupid

Quacks of Quedlinburg is a game about ducks living in a German town. No that’s not right, is it? Actually, the Quacks who are in Quedlinburg are the fake doctor type of Quack but I think this is a harsh criticism as once or twice my potions did not explode.

In Quacks of Quedlinburg, you are a “doctor” of sorts and you are taking part in a 9-day festival where you will be creating various potions and medicines to sell to the locals.

To do this you will blindly grab ingredients from a random selection thrown into a bag and then pop them into your cooking pot with your fingers crossed that you make something that doesn’t explode. So like homoeopathy but with a little more science.

Quacks of Quedlinburg won the 2018 Kennerspiel des Jahres and based on past experiences with winners of this award, I was looking forward to playing.

Set up is fairly simple and the rules are very good and easy to follow but Quacks of Quedlinburg has a couple of issues that I should address now. This game is a messy one, it spreads all over the table and the worst part is, you will probably be playing with excited children who will constantly mix the ingredients and knock components onto the floor.

You will need some containers for each of the ingredients and perhaps some sort of jacket, like a straight jacket to keep your children still.

The other issue is that as you place your ingredients into the cooking pot your children will knock and move their ingredients around, there is no way to keep the chips still so you should not play Quacks of Quedlinburg and want to win when playing with children because the score is always going to be subjective as they will move their last piece, forget if they put it in the pot or dropped it on the floor, put it back into the pile of ingredients or ate it.

Each player chooses a colour they want to play, Red, Yellow, Green or Blue, and receives their Drip tokens, scoring token, Rat Token, the 50 Seal and a cooking pot represented by a large cardboard cauldron with a spiral of numbers on it. You also receive a flask in your colour and a black bag to place your ingredients in.

The reason my kids are so excited when we play is that Quacks of Quedlinburg is fun with a capital F.

My daughter squeals with joy if she pulls a good token from the bag and my son jumps up (knocking the chips everywhere) when he gets the furthest and replicates football celebrations whilst saying “Quacks of Quedlinburg” in funny accents. These are the reasons I play board games. The joy I get from watching my children happy is worth the price of any game.

I have played two games with just my wife and me whilst we were learning to play and it was a far more civilised game, enjoyable sure but there was not a great deal of strategy. Luck of the draw is far too literal an analogy as despite the ingredients

Play then begins by first drawing a fortune teller card and carrying out its actions if it is pink or bearing them in mind if blue as they will not take effect until the end of the round.

Now all players place their drip token at the start of the spiral on their pot and then begin blindly drawing tokens from their bag at the same time until either, they choose to stop or they draw cherry bombs totalling 7 and their potion explodes.

You can, if you choose, use your flask to put a drawn cherry bomb back in the bag however, you can only do this before your potion explodes and to refill your flask it will cost you two rubies.

Scoring in Quacks of Quedlinburg

Once all players have finished drawing the evaluation phase begins. The player who made it the furthest around the pot without their potion exploding gets to roll the bonus dice. You could get a Ruby, a Pumpkin, Score 1 or 2 points or my favourite, get to move your drip token one place forward in the pot.

If more than one player ties they all get to roll the dice. Next, you check your ingredients and depending on the recipes in play take various actions. For example, in our first game we played with two players, we used the basic recipes, denoted by the number of bookmarks, and whoever had the most black chips placed gets to move their drip token one space forward and they gain a ruby. If there is a tie each player gets to move their drip forward. There are other round end checks for the green and pink chips.

You then see if anyone finished on a ruby scoring space and they gain a ruby. Then the player’s whose pots exploded choose if they would like to score their points as indicated on their finishing space in the post it or to spend the gold, in larger text, buying ingredients.

After this players can then spend rubies to move their drip forward or to refill their flask, the round marker is moved forward and play begins again.

In round 2 you add the Mandrake or Yellow ingredient as well as the balance of the game, the rat tails. Between some of the tiles on the scoring board, there are rat tails and you count the number of tails between you and the lead player, you can then place your rat token that far in front of your drip token and can therefore gain a headstart in the next round.

In round 3 you add the Ghosts Breath or Pink Token which will give you an extra point or more at the end of a round and play continues until you get to round 6 where you are forced to add another cherry bomb to your bag.

At the end of round 9 you carry out the evaluation phase and you then gain 1 point for each 5 gold you have and 1 point for each set of two rubies you have. Points are totalled and my loss is confirmed.

I am yet to win a game of Quacks of Quedlinburg despite having played at least once per day for the last two weeks. We must have played 16 games or more and I am still yet to win which I like to think is even harder than winning so could be considered a win.

I’m not going to pretend to know how to play or to pretend that I have any idea how things should work in Quacks of Quedlinburg but I like to remember what I have purchased so I can work out the odds of what chip I will likely draw from my bag.

This would be a fabulous strategy if the odds ever worked. More often than not my pot explodes with me saying, “the chances of me drawing a 2 value cherry bomb are so slim, damn”.

The ingredients have specific abilities that are activated at the end of or during the drawing phase. Without going into too much detail the red, yellow and blue chips have specific attributes depending upon the recipe books used.

Again the rules are clear and very well explained and there is another set of advanced rules we have yet to play because the children are happy with the game as it is.

The chips you buy are the only way you can influence what comes out of the bag. If your pot explodes early in the game too many times you are at a huge disadvantage in terms of points but because of the balance of the rat tails, I tend to forgo the points if my pot explodes and instead buy chips to make sure my bag is full of good ingredients.

This strategy doesn’t work as evidenced by my lack of wins but it is the one I am sticking with. I will point out though that statistically, it’s a sound strategy and I am sure once all this bad luck is gone I will be winning all the time.

Is the only factor governing the drawing of the chips but its also the best thing about the game, you never know what you are going to pull out next and now and then when you get to string a good combo together you can shout right into your child’s face, “See, I told you my way works”.

Other than the fortune teller deck, tokens, bags and rubies the game is made of good quality stiff cards that will last for a long time providing you don’t allow drinks at your game table. I am not a believer that a games worth is in the value of its components but I know some people are so it’s worth mentioning.

I was not interested in Quacks of Quedlinburg for the longest time. The theme, artwork, thoughts on how it played and even the name were not my bag (I didn’t plan that honestly) but having played I can say that Quacks is an exceptional family game.

The joy I get from watching my children have fun is immeasurable and I also have to admit to getting quite excited too. Drawing the chips from the bag and working out if you could risk another pull, weighing up the benefits vs the potential losses and deciding to go for it anyway is thrilling.

I have also never played such a perfectly balanced game. The attributes of the ingredients, the scoring system and the inclusion of the perfect number of rats tails so no one ever is a runaway winner means that every game we have played could have gone either way on the last turn.

We have played a lot in the last two weeks, Dead of Winter, Descent, Mysterium, Marvel Champions, Parks, Wingspan have all hit the table a lot but when given the choice my children have picked Quacks of Quedlinburg every single time.

There is something so joyous and wonderful about taking turns together, laughing when Daddies potion explodes AGAIN and the squeals and celebrations are what this wonderful hobby is about for me and my wife.

Quacks of Quedlinburg should be in every family home by law.