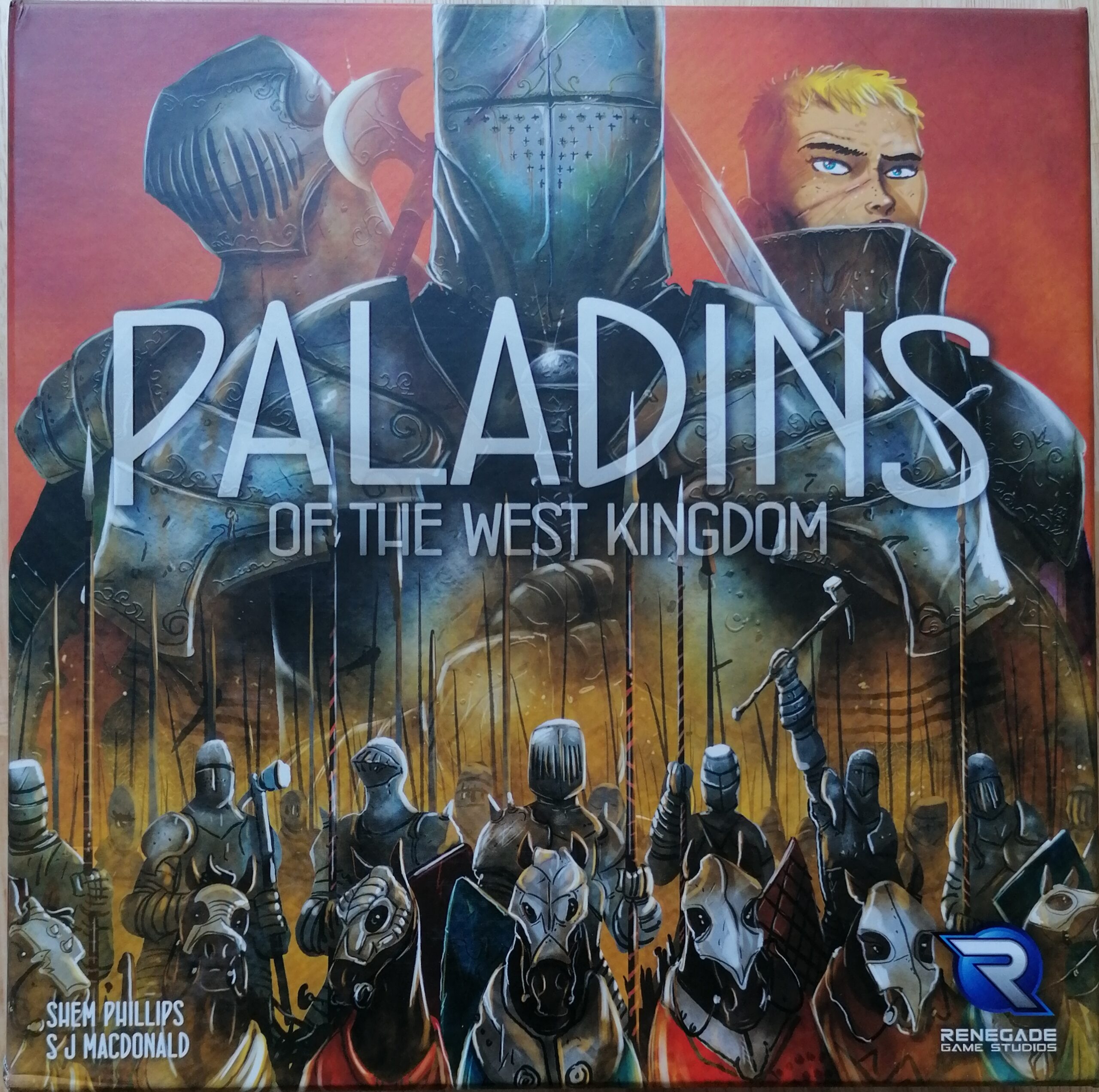 Paladins of the West Kingdom Review

The second instalment in this trilogy, Paladins of the West Kingdom fast forwards to a time when your land is under siege. Similarly to its predecessor, the theme isn’t strongly represented, though, again, the actions you are taking make sense within the context of the game. These games concentrate on the mechanisms, aiming to make them as strong as possible, allowing you to completely ignore theme if you wish, but still sprinkling it in so that, if you’re looking for it, you can find it. Theme is not high on my priorities when it comes to board games, though it is for many, and so I can see Paladins of the West Kingdom falling short for those people.

Something that needs to be acknowledged is that the jump in complexity between Architects, the previous game in this series, and Paladins of the West Kingdom is huge. Whereas I would feel confident in showing Architects to someone quite new to board games, this game is, in my opinion, for those with experience. The actions themselves are fairly simple, but the way everything links together makes for quite a brain-burner of a puzzle. This puts it right up my street, but it’s something to keep in mind when considering what kind of game you want to play.

Before you even begin a round in Paladins of the West Kingdom, you are faced with decisions that will determine how your round will play out. Many of the worker placement spots on your own personal board will require certain colours of workers, and you draft from a selection of cards to decide which coloured workers you will receive. You will need to look at which workers are available, and from that try to establish which actions you’re going to be able to perform with them. Of course, there are ways to mitigate the restrictions. Purple workers are wild, so they can be placed anywhere. There are also plenty of actions you can take which will allow you to gain more workers, potentially giving you the right colour at exactly the right moment.

Another decision you will face before you take an action, one which help nudge you in a specific direction, is to choose a Paladin. Each player has a deck of Paladin cards. Each deck is the same, but it’s highly unlikely you’ll be drawing them, and choosing them, and in the same order as any of your opponents. Before you draft the worker cards, you’ll draw three from the top of this Paladin deck. You will choose one to use this round, one to put on top of deck, so that they will be available to choose in the next round, and one to the bottom of the deck, meaning for at least the first few rounds, these will show up again later in the game. These Paladin cards not only give you additional workers, as well as temporary attribute boosts, but they also give you a special ability for the round. Ideally, you will use these to your advantage when taking actions, but you don’t have to, as you may have just chosen that Paladin card for the workers. I love asymmetry where you are not forced down a specific path, and given that there are three different aspects to these cards to be considered, your choices are plentiful.

Once you have your workers, players will take it in turns to take an action. Some actions will require only one worker, where others can require up to three, so you’re not necessarily going to finish at the same time as your opponents. You can take actions until you are out of workers, or until you wish to pass, and given that you can keep up to three workers from round to round, it may be a valid strategy, setting yourself up to be able to do more in the next round. The action spaces on the left-hand side of your board are fairly simple, from exchanging any coloured worker for a purple worker, to gaining money or provisions. This is not to say that this side of the board is not interesting. The space in the top left allows you to pay coins to move a workshop (green building) over to a space on the right of your board, decreasing the worker cost of an action, as well as revealing a new worker to gain immediately. I also find the spaces which give you a choice of playing one or two workers intriguing. Taking the space in the bottom left, you can place one worker to dismiss one of the townsfolk from the board, gaining an immediate benefit, but getting rid of them from the game. Or you can play two workers, one of which needs to be red (or purple) to gain that card. It’s more expensive, and trickier, as it requires a specific worker, but it may well pay off.

Undoubtedly, however, the actions on the right-hand side of your board are the most powerful, and also the more complicated. Unless you’ve placed a workshop on an action space, each action costs three workers, two of which will need to be a specific colour, and one way or another, taking these will move you towards gaining points in various ways. The thing about these actions which makes this such a brilliant puzzle for me is how the actions interact with one another, and this links in with the attributes, which I briefly mentioned earlier. There are three attributes: faith (black), strength (red) and influence (blue), and each player starts the game with all of these at zero. To the left of the title of these actions is a colour, and to the right there is a different colour, and this means that action requires you to have the attribute on the left to take it, and will earn you the attribute on the right. As an example, the Commission action requires you to have faith, and will earn you influence. This is why the temporary boost of the Paladins is potentially key, especially so at the beginning of the game. I love this mechanism, and the best part is that every option feels viable.

A lot of the actions from your player board will interact with the main board. Townsfolk (green) cards will be placed above the board, where you can hire or dismiss them. Outsider (red) cards will be placed below the board, where you can convert them or attack them. Depending on player count, there are up to 40 spaces on the board on which to place your pieces (through either the commission or garrison actions), earning you one-time bonuses. But perhaps the place on this board that will attract most of your attention is the card slots. There are 8 slots, three with red wax seals on them and five with green wax seals. The reds are objective cards. For each of the first three rounds of the game, one new objective will be revealed. These link to the actions on the right-hand side of your board, requiring you to have performed that action a certain amount of times throughout the game, and they will be worth more points later in the game they are revealed. The cards with green wax seals are revealed one at a time from round three onwards, and these present new worker placement spots, but now they are shared, so this introduces an element which hadn’t been seen until now, which is the tension of ‘is my opponent going to take that spot that I really want?’ If you had looked at this game and had been craving more interaction, this adds a welcome slice of it.

Something which has carried through to Paladins of the West Kingdom from its predecessor is the idea of debt, though it is done in a very different way. As I’ve mentioned purple workers are wild, but they are also criminals. For each criminal you take, you take a purple suspicion card, which will show either zero, one or two coins. You won’t take these coins from the general supply though. At the start of the game, above the main board, you’ll place between five and eight coins depending on the player count, and you’ll take the coins accrued on suspicion cards from here. Once this pile is fully depleted, an Inquisition happens, which is quite similar to the Black Market Reset from Architects. The player, or players, with the most suspicion cards, will gain a debt card, then discard half (rounded down) of their suspicion cards. There are a few reasons I prefer this to how debt is done in Architects.

Firstly, you’re more incentivised to go down this route, as gaining workers who can be placed anywhere, as well as the likelihood you will gain more coins, is most likely a trade you’ll want to make. Secondly, it introduces a nice bit of push your luck, as you can easily see how many cards you have in comparison with your opponents. And finally, because you discard suspicions cards if you have the most, it’s quite likely that you won’t have to worry about being the one who will accrue debt every time an Inquisition is triggered (and depending on how the players are playing, this could happen quite often).

As with the first in the trilogy, the production in Paladins of the West Kingdom, for me, is very good. Especially so, as there are so many pieces, all individually shaped and coloured. The workers are simple but nicely done, and for me, the colours are all easily distinguishable. The art is, again in my opinion, really nice, and I also like that, despite the fact that each player’s Paladin deck is the same, the background art is different, giving your deck a little sense of individuality. The other cards are all good-looking and clear, once you are used to the symbology (which, if you have played Architects, is easier, as they use the same symbols to mean the same things). My only complaint would be the box. They wanted the box to be the same size as with the previous game, and in theory, this is good, as it’s nice that the boxes line up well on a shelf. The problem is that, because there is so much more stuff in this game than there was in Architects, it is very difficult to get everything in without the lid lifting up at least a little bit, and so maybe the box symmetry could have been exchanged for one that would fit everything easily.

Though they are both in the same series of games, comparing Paladins of the West Kingdom to its predecessor is difficult, as they are very different games. This one is a much more complex affair, and so it really depends on what mood you are in. Personally, if I were to compare, I much prefer this one, as I like a crunchy game with an interesting puzzle. I prefer the attribute system to the virtue system in Architects, and I love the interaction between the actions. That being said, I think for a lot of people, I would recommend Architects as the better starting point.