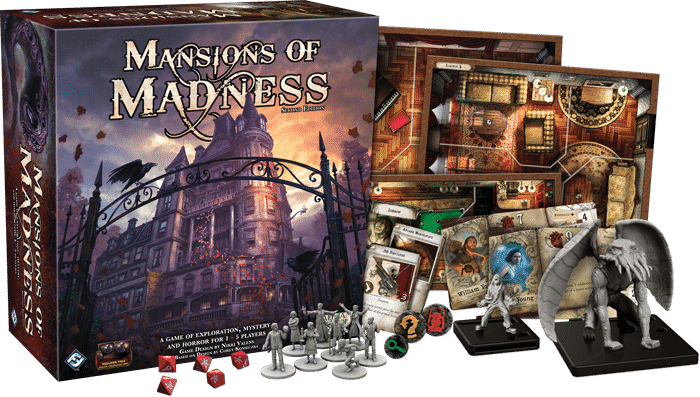 Mansions of Madness 2nd edition had not been a game I thought I was going to buy. I don’t know what Cthulu is, I don’t enjoy mind-bending things and brown.

The box is brownish!

However, I do love puzzles, I really enjoy a good mystery and it is from the same people that gave me Descent so it has to be good right?

I read some reviews before I bought the game and whilst I didn’t understand a lot of the terms I certainly did get the scores and Mansions of Madness does score very well.

Before I go on let’s get some things out of the way, firstly, Lovecraftian horror is a subgenre of horror named after H.P Lovecraft. It focuses on “Fear of the unknown” and this is essentially what Cthulu is. Lovecraft himself was quoted as saying “The oldest and strongest emotion of mankind is fear, and the oldest and strongest kind of fear is fear of the unknown.”  The physical representation of that fear, Cthulhu brings fear and madness just by looking at him, however, the logical fallacy being that once you see it you must know it so it would not be an unknown fear. Perhaps, most of that word salad was my inability to stop this sentence.

The game itself is played by using an app. Up to five players can take their chances in the mansion of madness after being invited in to solve a mystery. Its actually going to be hard to review the game without spoilers but I would like you to know that winning this game is very tricky. My compatriots and I are usually defeated as the mansion grows and more and more monsters rock up causing injury and madness but on the odd occasion we have managed to win and the sense of achievement is great. I felt the need to high five and punch the air, the relief that it was over made me realise how tense I had been while playing, a bit like the time I watched Rocky 4 at a campsite in Spain and people were shouting “Come on Rocky” as if it was a real fight and celebrated when he won. Which he had been doing for the 8 or so years since the film was released.

So, you play as an investigator, and depending on what the app has you doing you will be moving your way about an ever-expanding, only revealed as you explore, map that the game purposefully doesn’t give you time to explore properly.

In fact, if you try and search everything you see you will reach the end of your game quite quickly.

This is not a combat focussed game. It takes a lot to defeat most monsters and you will get hurt and suffer madness as you do but combat is at least balanced and for the most part, fair, if the dice are not cursed, my dice are definitely cursed.

The idea of the game is really to find the relevant clue, the key you need or something else to progress the story and solve the mystery.

Using the app on a tablet is great but I would avoid using a phone as the screen really is too small and as I end up being the one having to place the tokens tiles and monsters I do not want things to be more complicated than they need to be.

Mansions of Madness uses an app and that is bad?

Having no actual “Overlord” is perfectly fine and I do not feel the app detracts from the experience at all, however, I can see how people would potentially find this aspect frustrating, especially those experienced gamers who play games to have a break from technology but if you think like this you are missing out as Mansions of Madness has puzzles that you can attempt right on the app. It’s a really interesting way to implement this mechanic and I really like it.

As your Mansions of Madness game starts, the app will read out the scenario details for you, it’s then up to you to decide what to do. There are 5 actions and a special action you can choose from and you may perform 2 of these actions per phase. Each game begins with the investigator phase and will initially see you use both of your actions to move but you could choose any combination of Move, Explore, Interact, Search or Attack or you could use a special action and use an item.

The app will show you where to place search tokens or areas you can search and you will spend a good deal of time deciding what to search, what is important, what isn’t and where you should explore. Often you will find a locked door which means you need to search for a key or you may find a puzzle that will take some effort to complete between each investigator. Splitting up is often required to pass through the level efficiently but each investigator has different abilities and inevitably you will be in the wrong place with the right investigator.

After the investigator phase its time for the game to become a spiteful hateful shit by which I mean it’s time for the mythos phase. The game will choose a room or if it feels really bastardy it will choose an investigator at random (me, its always me) and this place or person will become the focal point of “bastard activity”. Cultists or monsters will spawn and attack or at the very least make you check your sanity, fail the horror check and you will gain an insanity condition that may and or may not cause you more problems further hampering your progress in various ways. I tend to fail horror checks because the dice hate me but your experience may vary.

These checks are the mainstay of the game, the dice will ruin or enhance your experience and you will be relying on the gear or spells you started with or find to save your bacon. It often feels like the bonuses you get that will help will also hinder you as much as you are aided and from start, to finish you will feel under pressure to do the right thing. Some people will not enjoy this constant pursuit, the worry about what is coming next and the fear of the mythos phase and what it might bring.

This is the genius of Mansions of Madness. This is what Lovecraftian horror is all about, the fear of the unknown, the fear of what you can’t know. Balancing exploration, searching, fighting, problem-solving and you really do have to work together to get through the game successfully, however, there are times when you might need to help the monsters win if you are to win!

If your health reaches 0 you gain an injury card, if your sanity reaches 0 you get at insanity condition. The injury cards are pretty straightforward and affect you. The sanity cards, however, are a different matter. They may have alternative win conditions imposed on you. You might need to set fires or gain tokens at any cost, even if it means betraying your team or it could mean actually going full traitor and stopping the team from winning by siding with the monsters and sabotaging your former teammates.

Just when you think this game is a complete bastard you suddenly lose all your health or sanity for a second time and are removed from the board, this action triggers other players to have only one more turn to win the game, if not, you lose. Bastard.

As you start the mission you will have no clue what you need to do to win, by the time you find out, its usually a living hell of sanity checks and fighting monster after monster. There is a real sense of urgency and an overwhelming sense of oppression that some people will absolutely love.

Whether you enjoy the background the game itself is easy to learn and very well-paced. We only have four scenarios to choose from as we do not have any expansions but am assured, they all add a great deal to the experience.

For me the app is a great thing, it balances the game based on the number of investigators and will also handle what to place and where (unless this is the future you will still need to physically find and handle everything yourself) but I really like the speed and the pacing of the turns, you never feel like you are waiting for it to be “your go” because there is so much strategizing and the necessity to work together that you are as involved in other players moves as much as they are, which is why it hurts so much when you have been betrayed.

Combat is again handled by dice and works pretty well but this is not a game about combat. You will be able to gain equipment and weapons such as guns and swords and spells or even items that can start a fire if you are so inclined.

The insanity cards add an element of social deduction and mistrust to the game too which means you are always suspicious of anyone taking an action that may not make sense to you when they have an insanity card.

The last part of the game that makes it for me is the miniatures. I have spoken before about the joy I get from painting miniatures but I have only painted one figure so far from Mansions of Madness (Star Spawn) as other games have been taking my time (Zombicide Black Plague has been a task and a half) In the core set there are 8 Investigators 18 Small monsters including 6 cultists and 4 Medium monsters and 2 Large monsters.

If you struggle with adding up that equals 32 which is quite a lot of plastic but they are not overly detailed and I hope they won’t take too long once I get stuck in.

Mansions of Madness is a really great game with fantastic mechanics and is an easy way to get into gaming. It can get a little confusing when it comes to certain win mechanics surrounding insanity but it will only take a discussion, some googling and a re-read of the manual and a few forums and you will be put right. The app is great but could put some people off and all the cards and tokens can make this a bit of a table hog. Overall though this is a great game and one that despite the theme you can enjoy regardless of your affinity or lack of regarding horror games in general.